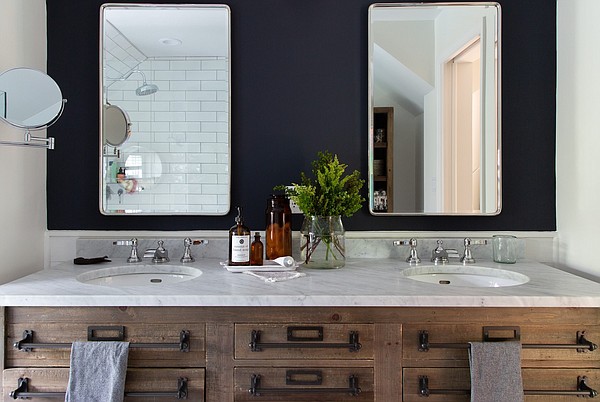 Pardon the potty talk, but we’re discussing bathrooms today. These are on my mind because, not to sound too la-di-da, I just returned from France, where I spent a week cycling through the Loire Valley visiting several chateaux.

While wearing sweaty spandex and helmet hair, I visited the exceedingly lavish castles of the beheaded royal family and other aristocracies, which gave me insight into both why French commoners revolted and how far bathrooms have evolved.

As I passed through dozens of lavish bedrooms and salons outfitted with beautiful tapestries, painted portraits in gilded frames, carved marble fireplaces, and ornate ceilings, I didn’t see a single bathroom. Because. They. Doesn’t. To exist.

No royal flush, of course. Even the Château de Chambord, the largest castle in the valley with 426 rooms, had no bathroom. So imagine the residents hosting a lavish dinner party with guests all festooned in ermine furs, pearls and silks, seated around an ornate dining table, and then, heaven forbid, one guest has to powder their nose ?

I saw a chair with a built-in chamber pot.

The Château de Chambord, the largest castle in the Loire Valley with 426 rooms, had no bathroom. (Courtesy of Doug Carey via Marni Jameson)
Fortunately, French bathrooms are commonplace today, but they still fall short of American standards. Every time I come back from there or any foreign country, I thank heaven for American plumbing.

Don’t take it for granted.

Coincidentally, I returned home to find that Houzz Inc., this online home design platform, had just released its 2022 Houzz US bathroom trends study, which analyzed data from over 2,500 homeowners who had recently completed or were in the process of remodeling their bathroom. .

The juxtaposition of Houzz tallying the number of homeowners installing anti-fog mirror systems and dual shower heads, when I had just witnessed how the wealthiest French kings and queens took weekly baths in buckets, did not escape me.

The report also confirmed that American bathrooms, which I dare say are some of the best in the world, are still getting better. If you’re looking to improve yours, trend data is important.

I skimmed through the 32-page report, then called Houzz economist Marine Sargsyan to tell me about the results. But first I had to ask, “What’s going on with bathrooms overseas?”

“In other parts of the world, people tend to think of bathrooms as purely functional, while Americans think of them as a place to relax and unwind,” Sargsyan said. “But you’ll be happy to know that bathroom renovations are the most popular project, not only here, but also abroad.”

Thank God. Here are some other findings:

◼️ The biggest surprise. “Wood replaces white,” Sargsyan said. “For a very long time, white has been the dominant color in bathroom and kitchen cabinetry, so we were excited to see, for the second year in a row, wood cabinetry trending, along with other colors .”

◼️ Main reason: The number one reason homeowners renovate their bathrooms is because they’re tired of their outdated style (48%). The second most important factor (33%) is that the old part fails.

◼️ Contactless technology. Motion-activated toilets and hands-free faucets are no longer just for airports, Sargsyan said. Half of respondents have installed one or more high-tech features in their remodeled tubs.

◼️ Most Essential Upgrade: If you can’t afford a complete bathroom remodel, start with the systems. “The average American home is 40 years old, which is why our survey shows that 62% of homeowners have upgraded their bathroom plumbing and ventilation,” Sargsyan said.

Marni Jameson is the author of six books on home and lifestyle, including “What to do with everything you own to leave the legacy you want”.

5 compelling reasons to remodel a bathroom